There are defining films for each generation that children tend to grow up with and look back at with delightful nostalgia. Some with Star Wars in the 70s, others with Ghostbusters in the 80s. I grew up with Jurassic Park. I was only 2 when it was released in the cinema but it soon found its way into our household in VHS form (oh god, do I have the right to feel old right now? There could be people reading this who have never even seen a VHS!) And so instead of watching The Lion King on repeat, I watched Jurassic Park. Seriously. On repeat! Look at the state of the video now… 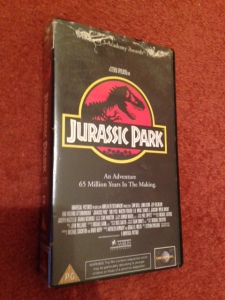 Yep, I did manage to root that out and find it for the purpose of this article. You’re welcome. (Please ignore the chewed edges, I think that was how my 4 year old self dealt with those T-Rex scenes).

The characters in JP are essential to its success. As an impressionable pre-teen, Lex was the clever computer hacker who I pretended to be when I ran around the garden looking for dinosaur bones. In addition Ellie Sattler was the girl I wanted to be when I grew up- actually, I still want to be Ellie when I grow up. She quickly became a type of feminist icon to me when I was younger and taught me that women can be scientists and intelligent and ‘inherit the Earth’ and not have to be half naked while they do it.

Over 20 years on and JP is still a pop culture phenomenon. Those special effects aren’t outdated in the least. JP shows the difference between films which rely on CGI and ones who use it to simply enhance particular moments. Using Star Wars as an example, the original trilogy was heralded as a success in 1977 as far as CGI was concerned- however the same cannot be said for the prequel. Six years on from Jurassic Park and The Phantom Menace exhausts its use of CGI to the point where it is no longer seamless or used for enhancement; you are brought out from the narrative because the special effects are so obvious.

I went to see the 20th anniversary re-release of the film in 3D and the feelings of wonder and awe that I felt all those years ago were still present- the theatre was sold-out which helped intensify the feelings of an event. Spielberg used 3D as brilliantly as he used simple CGI 20 years ago- at essential moments to enhance the spectacle. With Jurassic Park feeling so timeless 20 years later, can we say the same for a modern day success such as The Avengers. Will that still be relevant and timeless in 2033? I doubt kids would have been chewing their DVD case with tension thats for sure.

Hello everyone. Happy New Year! With the new year I thought I’d do a bit of an update.

I have taken a small absence lately. This is due to some very exciting personal endeavours. I spent a lot of 2016 saving lots of money and working really hard with crazy hours. That’s due to the fact that I’m now currently travelling South East Asia which is incredible and worth all of the missed social events last year! However I have still been putting ‘hands to keyboard’ so to speak.

I have been writing a few pieces for a friends blog and group; Funko Rocks. It’s all about Funko figures and by extension the worlds they exist in. I’ve written a few pieces about what we had to look forward to in the new Star Wars offering ‘Rogue One’. As well as a few other tid-bits. 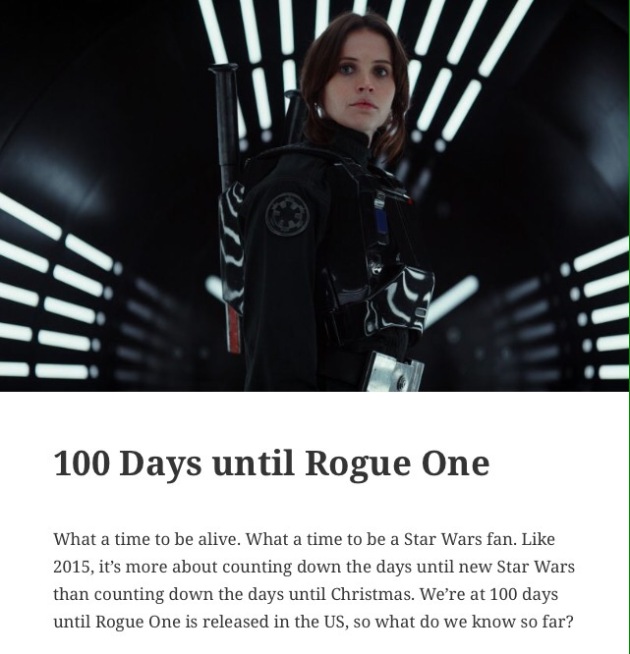 You can read my countdown to Star Wars here. You can also follow Funko Rocks’ blog here and on Facebook here. You can expect lots of fun material such as interesting art work and of course all the new Funko releases.

I’m two months into my trip and it turns out there are a lot of 24 hour bus rides involved. Therefore it would be rude of me not to usefully spend my time writing a few little things!

Until next time! X

I’m afraid that I have broken the first rule of blogging and ended up on a  6 month accidental hiatus. Oops.

After graduating University I ended up in a bit of a slump, as most graduates do I expect, and was just metaphorically wandering around not sure what to do with myself. I blogged to keep myself busy and make myself feel productive whilst I job hunted. Then I found a job and that was that, I work 40 hour weeks and blogging most definitely took a back seat. Even though I consciously knew that I’d put blogging on the back burner, once I’d stopped it was hard to get back in the swing of things.

However, I’m more determined than ever to try and get back into it. So watch this space.

Last night I returned from my local cinema filled with excitement after seeing Zack Snyder’s ‘Man of Steel’; so much excitement in fact that I began trawling the internet for blogs, videos and critics opinions and views as I became so encompassed in the hype. At the peak of excitement at around midnight, Total Film’s twitter account posted a video of their team discussing and reviewing the film; perfect timing! After hitting play however I became somewhat down heartened at seeing four men sitting around a table. As a woman I wanted to hear what this big blockbuster superhero film meant to females; whether it was considered approachable, how it handled Lois Lane as a character from a female critics point of view. Don’t get me wrong, I’m sure these four men know what they’re talking about, it’s why they do what they do, I was just a little miffed that a woman was not included in the discussion. The four guys discussions and banter was still funny and insightful, I would have just liked the input and opinions of a woman.

Instead I found this article explaining how film criticism is even more male-dominated than it was six years ago. More specifically, the study found that of the top critics on Rotten Tomatoes, female critics make up just 18% of the film reviews. At this point I was in disbelief and a little exasperated.

Furiously opening new tabs left, right and centre, I eventually found myself on the Guardian film blog website; now desperate to find myself a well-established female critic preferably employed by a reputable magazine or newspaper site. This effort was mostly just to assure myself that there were some out there. On the first page of the Guardian’s film blog, there was just one article written by a female and another fourteen articles written by male critics.

Now, I know that I haven’t spent weeks and months slowly searching the internet for female film critics and I am 100% sure that there are some amazing ones out there. However, in my couple of hours of searching, shouldn’t there be a fair few more that I should have stumbled upon?!

Hence my creation of this little blog.

I am a former media student and I am an avid film and television watcher however I am not going to pretend that I know anything more than any other film critic. I am however going to have my own opinions and unique take on films. I enjoy discussing films, tv shows and pop culture, and I know that I bore my family and friends when attempting to do this with them as they aren’t really interested in how I felt when that specific camera angle did that thing over that guy’s shoulder.

So here’s my first post. A bit of why this came to be created I suppose. A mixture of always wanting to begin a blog and the last push that discovering that article about female critics gave me to finally create one. I understand that there are hundreds, if not thousands, of film blogs out there and so I don’t expect avid readers; I am doing this because I love it and if someone else does too then that’s just great.

I'm a 25 year old female Media graduate who enjoys discussing films, tv, celebrities, culture and a little bit of feminism thrown in. Have a good read & come back soon!